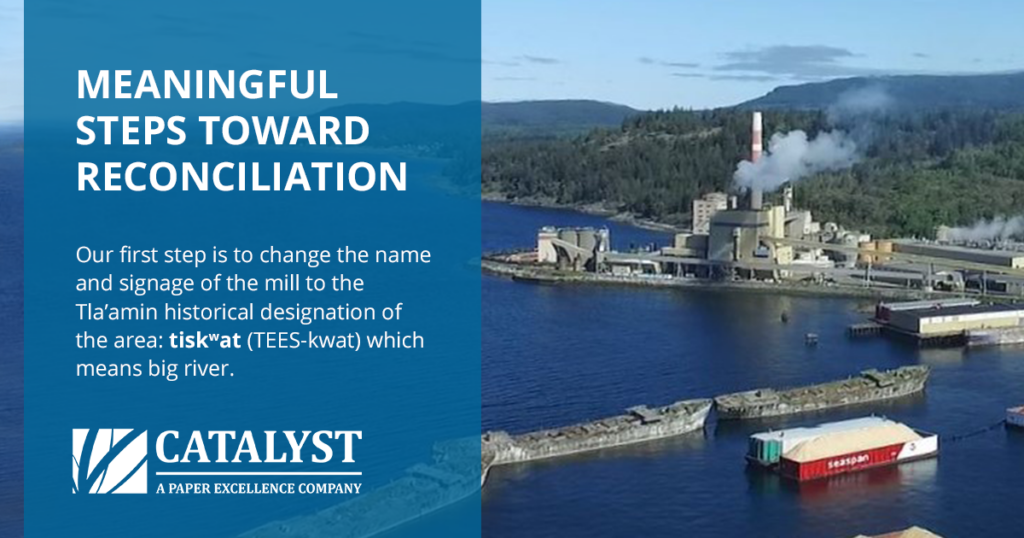 [Richmond, BC] – The Tla’amin Nation and Catalyst, a Paper Excellence company, announced today their intent to build a Memorandum of Understanding that sets out the intentions of all parties to build a new and collaborative relationship together. Among other important initiatives, a first step will be to change the name and signage of the Catalyst Powell River mill to the Tla’amin historical designation of the area: tiskʷat (TEES-kwat) which means big river. The mill was built on a significant Tla’amin village site, displacing and relocating the population in the early 1900s.

“This name change is a long time coming and an important gesture to repairing harm,” said Hegus John Hackett. “Our ancestors will rejoice to hear this place once again being called tiskʷat, and Tla’amin looks forward to the hard and productive conversations to come as we build a new relationship with Catalyst.”

“We are working closely with the Hegus John Hackett and the Tla’amin Executive Council to ensure the steps we take in building this new relationship are thoughtful and measured,” said Graham Kissack, Vice President, EH&S and Corporate Communications. “We believe that reconciliation through collaboration and an open-minded approach creates enduring and meaningful connections.”

Paper Excellence’s approach is to build long-term high value partnerships with communities in its operating areas and to align its vision, values and corporate policies with local Indigenous Peoples.