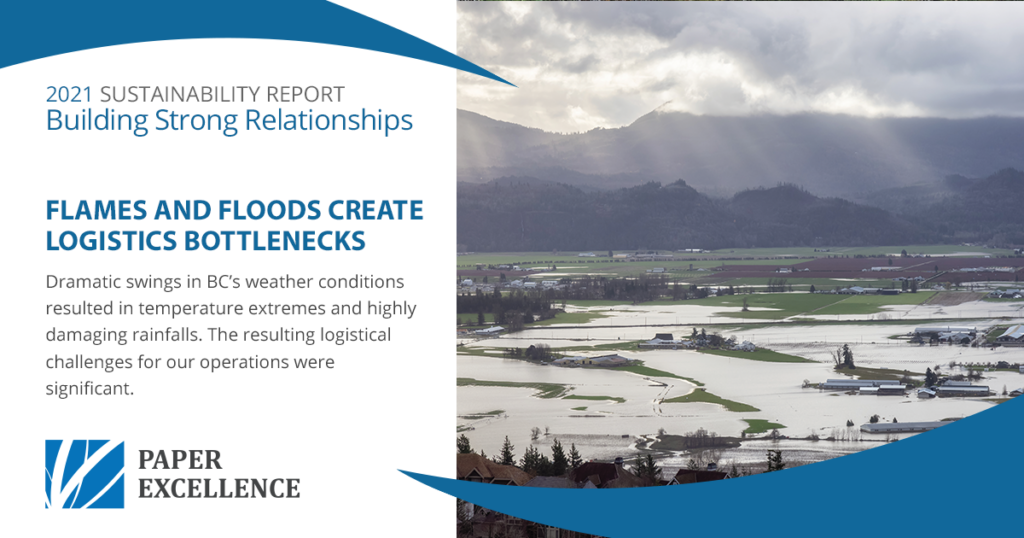 2021 was a year of mind-boggling extremes in British Columbia, with seasonal temperatures swinging across a range as wide as 75°C , and with record-breaking fall rains in between that caused widespread flooding.

For our coastal BC mills, the unprecedented weather seriously strained effluent treatment systems.

Operators at Port Alberni were challenged in June (when an all-time high temperature record was set) to prevent over-heating of aeration blowers that are critical for effluent treatment; and then again in September by intense rains that dramatically increased the surface runoff into its treatment facility. Extensive excess pumping and treatment capacity was instrumental in avoiding any non-compliances.

Both Crofton and Howe Sound experienced similar rain extremes, creating a need for difficult operational judgment calls. For example, while shutting down a mill will cut off process effluent, it can also create a short-term surge that makes matters worse.

At Crofton, the mill was fortuitously on a temporary shutdown at the time of the heaviest rainfall, making it easier to manage. Howe Sound, however, had a non-compliance on effluent pH levels on an occasion when more than 20 mm of rain fell within a single hour.

Work has been undertaken across these mills to optimize cooling, pumping, storage and other operational capacities, in anticipation of extremes becoming more commonplace in the years ahead.