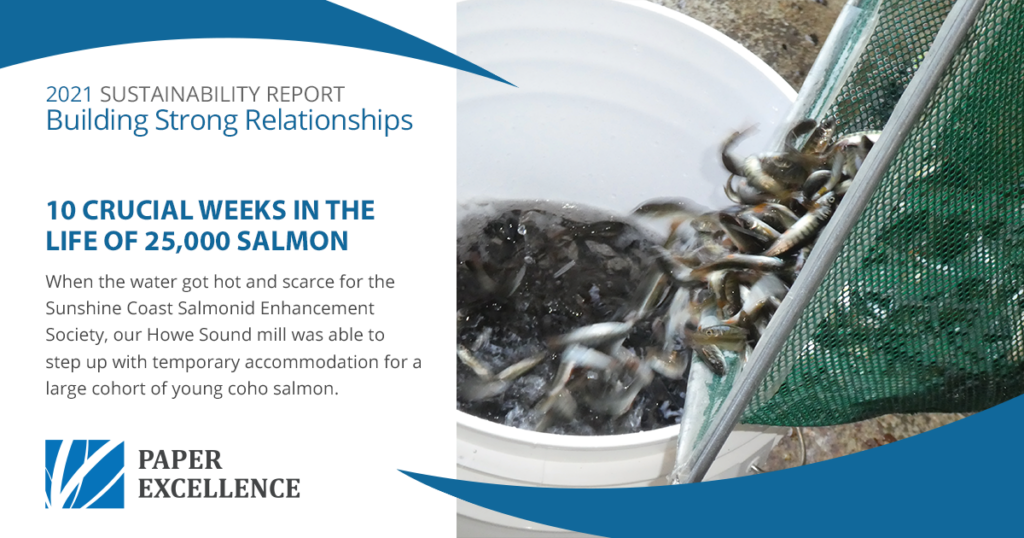 To successfully help nearly 25,000 hatchery coho salmon fry to mature over the course of a summer, you need both large-capacity tanks and a reliable supply of cool water.

Our Howe Sound mill happens to have both (it used to have an on-site hatchery). So when the Sunshine Coast Salmonid Enhancement Society had difficulties with water availability and temperatures at its nearby Chapman Creek Hatchery, Paper Excellence was a natural partner for it to turn to.

In late June, with creek temperatures rapidly climbing past 15°C, the Society transferred the fish to the mill, where much cooler water was available from Rainy River. And although water supply became tight over the summer at the mill too, careful management ensured sufficiency for all needs. The salmon stayed at Howe Sound for about 10 weeks, during which they matured from roughly 1.5 to 3.75 grams.

This avoided the risk of having to release them at an early stage from the hatchery, which significantly lowers their survival rate. The fish were transferred back to the hatchery at the end of August, and were due for release into Chapman Creek in spring 2022.

In the meantime, the Society has increased its well-based water supply, to give it more water-management latitude. But the “salmon summer camp” at Howe Sound mill was crucial to continuity of operations in 2021.